skip to main | skip to sidebar

I know you're all eager to hear about my move and the new job and my life here, so I suppose that I'll oblige you with a few excerpts from the past month:

First of all, everything has happened so fast, and it's a bit of a blur.  It seems like I was waiting tables at the good old Outback in Longview such a short time ago, but this is my sixth week working at UT Austin.  I actually worked at Outback the day before I started work here.  I waited tables, got "fired" via cake, and drove to Austin, moved everything that would fit in an Expedition into my new place, and slept on my brand new... air mattress. 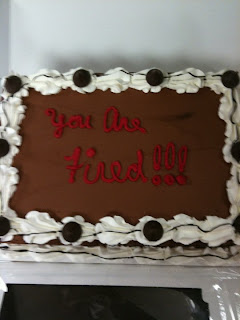 Though my furniture situation was bleak, I could hardly sleep that first night for thinking about starting my new job as a Recruitment Account Manager at UT Austin.  For those who don't know, I help employers form a strategy for best recruiting students from Red McCombs School of Business.  I have already worked with Google, Facebook, Dell, Boston Consulting Group, Deloitte Consulting, Intel, and Microsoft to name a few.  The job is normally fast-paced, and I like my team and the work that we do.  We also run the 43-room interview suite across the hall from our offices. 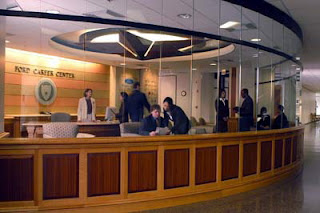 I have definitely hit the big leagues of career services... Princeton Review says we're number 1 in the nation, but I'm not one to brag.  It's been a lot to learn, but I'm moving along rather quickly, and I'm starting to feel like a valuable part of the team.
Enough about work.
Since moving here, I have met a TON of people, reconnected with old friends, and even been on a few dates.  Yes, you read that right!  The permanently single guy is actually going to dinner and drinks on occasion.  I guess there's just a bigger and (in some ways) better selection here.  And there's no limit to the types of places that I can go to have these dinners and drinks.  The culinary and alcoholic choices in this city leave very little to the imagination.  Happy hours are ridiculous here.  Even those ballin' on a budget can have a couple of good afternoons a week without breaking the bank.  Then, of course there's the places where you just go and party hardy.
Also, bands and music abound.  So many free and cheap performances, and then we have all the large performing venues that host the bigger, touring stars, too.  I haven't been able to take advantage of this much, mostly because getting settled, creating a network, and getting into the scene takes time, but it's hard to get away from live music in this city.
Other free things here?  I went hiking... Shut the front door, I know.  It was actually a good time, and I plan on going again soon.  No, I haven't turned into a hippie, but it's easy on my knee (which STILL has not recovered from my December marathon), and it keeps me active.  Also, there's museums coming out of my ears, and sometimes just taking a stroll through downtown and seeing what there is to see provides ample entertainment.  There's tons of parks and trails, movies in the park, various community theaters and orchestras/symphonies, and foreign film viewings in numerous locations.  If you are bored in Austin, you're doing it wrong.
I'll give more updates as things go down, but for now, I leave you with this: it was one of my best decisions ever (right up there with deciding to coming out, choosing to spending a summer in Dallas with Southwest Airlines, and realizing it would be epic to join SAE) to move down here.  I encourage you to figure out what you want, and go, and get it.  Life is too short to make excuses.  If you want it, you can find a way.  Stop holding back and live your life the way you always thought you would.  I'm not saying quit your job, move, and hope for the best, but make a plan and stick to it.  I did it, and I'll never look back.  Adventure: it's the only way to live.
-Scott
Posted by Your Best Friend at 11:32 AM 2 comments:

Well, it took me awhile, but I figured it out. I have a direction to head with my life. See? That's why this post is called "Finally."

I am going to head in the direction of the restaurant industry. I would love to own my own restaurant, but I'm gonna try some things with Outback and see where it takes me. I don't want to go to culinary school or anything because gay men have no business being in the kitchen (yes, I just generalized and stereotyped myself). I want to deal mostly with the front of house (the dining room/bar/lounge) and really focus on providing a laid back but fun atmosphere while developing a great staff.

Other options that probably won't happen but could be amazing are: being a restaurant critic for a large newspaper, having my own travel show, running the front of house for some amazing chef that's really well known in some large city like Seattle, and marrying someone rich so I can just do whatever.

My cutting back on alcohol has been fairly successful, partly because I'm so busy, and partly because I stopped drinking beer at all. It's carbonated, and it's killing my running efforts, so I stopped having cerveza.

I haven't had fast food in weeks, and that alone makes me feel great, but I also don't eat fried food or anything with a lot of sugar or fat. I run at least four times (sometimes more) a week, and most of my liquid intake is water (as it should be). I've been getting plenty of sleep, and I'm probably going to get a membership at Anytime Fitness soon so I can get some quick strength training in after work or while I'm just chilling on the weekends. There's one close to my house, one close to the University, and one close to Outback, so it seems pretty ideal. Plus, for me, being healthy means not losing any weight... Gotta keep working the muscles or they will be even more non-existent.

Things are going well at both jobs, and my class is pretty straightforward, so things are good. Just wanted to let y'all know that I feel great.
Posted by Your Best Friend at 4:42 PM 1 comment:

I can't believe I'm saying this...

I'm thinking about cutting way down on my drinking.

Yeah, I'm serious. I have a few reasons for this, and they are as follows:
The expensive thing is self-explanatory, but seriously, I spend a lot of money on this little hobby of mine. Like most other things that I like, I want the best, so I (almost) always get premium drinks, and I stopped being a light-weight a long time ago, so it adds up quickly.

I may or may not have mentioned that I'm training for a marathon, but now you know. I was trying to run this morning after having a VERY good time last night, and I was struggling. I swear I thought I was gonna die. I can't do that to myself, or I'm never gonna reach my running goals, which are a higher priority for me.

The last one is hard to explain. A wise man (probably more accurately described as a "wise-guy") asked me recently if I drank socially or if it was my job. I thought about it for a long time because I'm not a raging alcoholic or anything, but I decided that people expect me to drink. They expect me to drink good stuff, and they expect me to drink a lot of it. It's the precedent that I have set. Of course, I'm not one to do things because people expect me to, so after reading Rachel's blog, (where she mentions doing something unexpected) I decided to cut back. I know that "cutting back" sounds like a soft commitment, but I'm going to really try to do it.

I want to end up as a "social drinker." If I'm out with some friends and we decide to have drinks as adults, then I will be happy to pick up a glass, but I want to cut it out of my lunches (yes, I drink at lunch), I want to stop spending so much money on it, and I want to quit drinking earlier in the night than I have been. This little boy needs to get to bed so he can run before it gets blazing out.

Thoughts?
Posted by Your Best Friend at 12:30 PM 3 comments:

Ask me anything http://formspring.me/scottkgood
Posted by Your Best Friend at 5:09 PM No comments:

Me, Myself, and someone else... one day